Tennis is by far my favorite sport to watch and play. It has also been called a Gentlemen’s Sport for as long as I can remember. Players are respectful to each other. They shake hands with each other, the chair umpire, etc… before and after matches (no matter what happens during the game). Yesterday that was not on display in the Woman’s Final between Serena Williams and Naomi Osaka.

It was a hard fought game between these ladies and like any game with Serena emotions are always high. There are fist pumps, yells and grunts. Those are a given but yesterday we saw a side that was less than her best. She was frustrated and at one point very insulted by an accusation, that I do believe most of us, would be insulted by. She yelled at the chair umpire and some said things that I’m pretty sure she would like to take back (maybe not, I don’t know her). Now, I have never had to walk a mile in this woman’s shoes but she has had to go through a lot. I admire her. Her persistence, her moxy and just her go get it attitude. I did however, cring a lot yesterday while hearing all that was said and done.

By the time 3 violations were leveled at Serena and the final hits soared over the net history was made for the first Japanese woman to win at the US Open.  Naomi Osaka beat her hero 6-2, 6-4 amid a chorus of boos and cheers. There was a lot of tears Serena however did come through in the end like the class act she is and ask for everyone to celebrate and give Naomi the credit she was do. Serena acknowledged that Naomi played her heart out and deserved the win and was thankful to the crowd for standing behind Naomi. 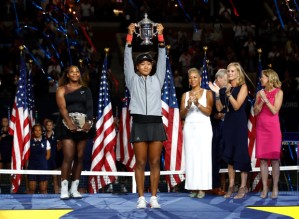 2 thoughts on “One For The Record Books”

My Tweets
WeeklyWisdom - The Weekly Dose of Wisdom

The Weekly Dose of Wisdom

Enjoying Life in the Ozarks